Our Harlequin Pinschers are proudly registered with the Harlequin Pinscher Association (HPA) and are from some of the best bloodlines.  Lineages can be traced back to the foundation stock.  We raise HPA registered pups in merle, brindle, merle/brindle and Tricolor patterns.  We have recently acquired a piebald patterned male and hope to incorporate  the piebald gene into our program in the near future.

Brief History of the Harlequin Pinscher

The Harlequin Pinscher is one of the original patterns that the Germans had, bred and registered as Miniature Pinschers.  As it goes with most clubs when somebody gets in the position of authority and power and decides they don’t like something they change it irregardless of what the eventual outcome will be and the same holds true for the Harlequin Pinscher.

The Harlequin Pinschers history  does run hand in hand with that of the Miniature Pinscher.   Their native land and place of origin is Germany.  The first German documentation  for the Miniature Pinscher was established in 1880.  The first Miniature Pinscher Breed Standard was established in 1895 by the Germany Pinscher Klub now called the Pinscher-Schnauzer Klub.  The colors listed were Red/Yellow, Gray-Yellow, blue/tan, Black, Gray like iron or Silver Gray, either one color or with yellow-brow or light red marking at the eyes, muzzle and legs.  Of one color, blond, or dirty gray-white or white with black spots.     There is no concrete evidence of the exact colors in the standards description as there is little to no documentation that was kept on the development of the breed.   We can only speculate that the Dirty Gray-White would most likely be Merle and the white with black spots was likely the Double Merle version of the Harlequin or it could be possible that it was actually Piebald in the breed as well.

In the 1920’s the merle version of the Miniature Pinscher became part of a controversial subject in the German Miniature Pinscher Breed Club and was unfortunately removed from the German Breed Standard and was forced to start their own breed which became known as “Harlequin Pinscher”.
The Original Harlequin Pinscher breed standard established in 1923 called for it to be 12-14 inches tall being 22-26 pounds in weight.  The color variations were Harlequin on a white, gray or black background having a black or self-colored nose according to coat.

The early breeders of the Harlequin Pinscher however were unaware of the genetic makeup of the Harlequins and the  gorgeous but semi-fatal status of the Merle gene.  Over a period of years the dogs became decreasing in number due to hereditary defects.

The American Kennel Club allowed the first registration of a Miniature Pinscher on March 31, 1925 which was an imported one from Germany and was listed as being “black, red, brown”.  The Harlequin description  was ALWAYS a breed pattern FAULT in the AKC Breed Standard and then changed to a disqualification in later years.  A foursome of Harlequin Pinschers was shown at Crufts in 1938.

**One breeder in the United States was known to of bred Harlequin Reh Pinschers in the “Black & White” variety as late as 1940.

The AKC approved a revised Breed Standard on May 13, 1958 for the Miniature Pinscher which included only Black, Red and Brown as approved colors by the standard.  Other colors at that time were still listed as FAULTS.   The last known Miniature Pinscher registered with the AKC with the Harlequin pattern is  ???????.

The re-development of the Harlequin Pinscher

THE FOUNDATION STOCK Registry was discontinued January 1, 2017.
​
The HPA rules are VERY STRICT and are to be abided by and WILL BE UPHELD WITHOUT EXCEPTION whereas ONLY 1 PARENT may be Merle and the subsequent parent being that of a Purebred Miniature Pinscher of the NON-Merle pattern.  A Merle x Merle breeding is considered unethical.

There are 3 Primary Colors in dogs being  Black, Red and Brown.  All other colors are dilutions or modifications to these 3 colors.  There are a variety of coat colors and patterns in the Harlequin and Miniature Pinschers.

To be breed standard ALL Blue, Fawn, Black & Browns in Min Pins & Harlequin Pinschers MUST have Tan points.

To be breed standard  ALL Blacks of  the Min-Pins and Harlequin Pinchers MUST have tan points, ​Black noses, Black eyelids and Black paw pads.  None of these breeds have solid blacks. 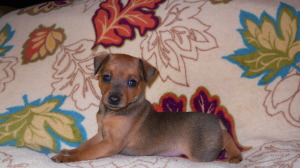 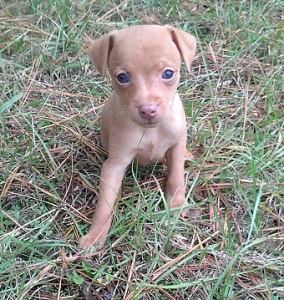 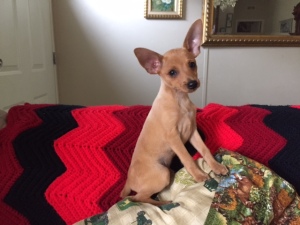 To be breed standard  ALL Browns of  the Min-Pins and Harlequin Pinchers MUST have tan points, ​Brown noses, Brown eyelids and Brown paw pads.  None of these breeds have solid browns.
There is NO black on a brown dog.

​The dilute gene is recessive and found on the D locus.  Dilutes should be bred with extreme caution and only from obviously full coated breeding dogs. They can have a condition called CDA – Color Dilution Alopecia meaning hair loss known to the Dilute gene.

To be breed standard ALL Blues of the Min Pins and Harlequin Pinschers must have tan points, Blue noses, Blue eye lids and Blue paw pads. 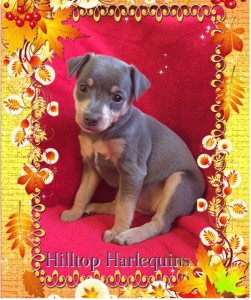 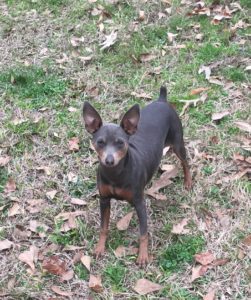 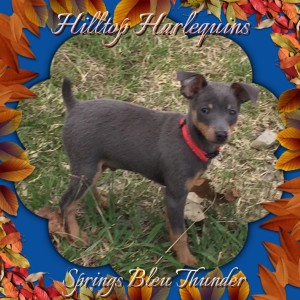 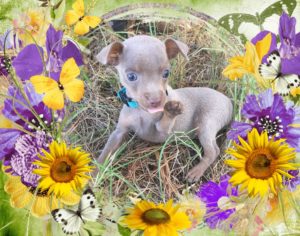 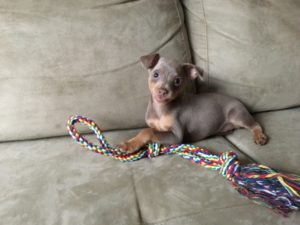 Blue-Fawn is the dilution of the black hairs on a Stag Red dog instead of the whole coat being diluted.  A blue-fawn has a blue pigmented skin making the coat appear a Peachy cream color.
To be breed standard Blue-Fawns must have Blue noses, blue eye rims and blue paw pads.
Blue-Fawns DO NOT have tan/rust points. 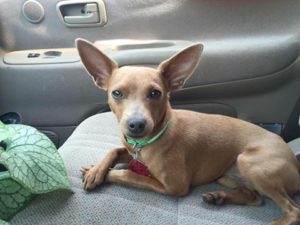 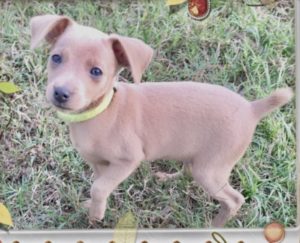 Tan is the dilution of the brown hairs on a Red with brown nose dog.  A tan has a brown pigmented skin, brown nose, brown eye lids and brown paw pads.  Tans DO NOT have tan/rust points.

​Merle is a PATTERN and not a color – it MODIFIES colors.  Merle can occur on any color and even in combination with other patterns. Merle effects only eumelanin thus Black, Brown, Blue and Fawn coats are noticeably merle in pattern.  Red is Phaeomelanin and often times the Merle gene is not easily noticed on a Red coat.​  Red Merle is an undesirable color/pattern combination due to it’s lack of being a visibly seen at times.  Merle is a dominant gene in all breeds therefore AT LEAST ONE parent must be merle in order to get Merle offspring.

The Merle gene modifies the coat to a lighter color, leaving patches of the original coat color. Merling can be in varying degrees from just a single spot to almost full body.  Merle modifies the coat by LIGHTING areas it touches which can include eyes turning them blue.

The Double Merle gene is semi-lethal and 2 Merles should never be bred together.

Merle X Merle is a highly UNETHICAL breeding.  Double Merles can have severe health issues, be blind, deaf, deformed and/or die in-utero.  Ethical Registries concerned for the health of the breeds they register will NOT accept Merle X Merle breedings nor will they allow Double Merle offspring/dogs to be registered in their database. 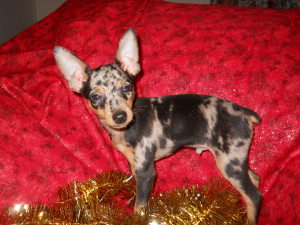 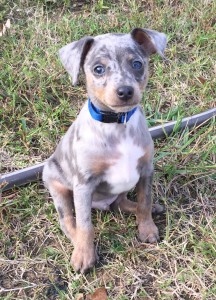 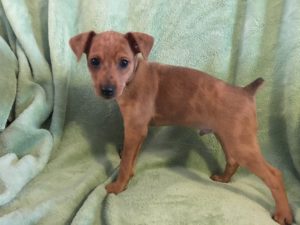 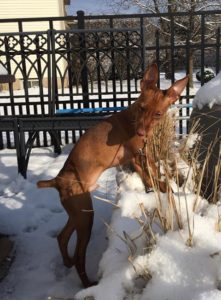 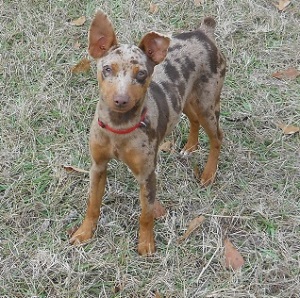 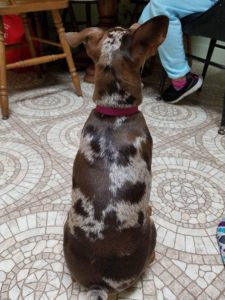 .
Brindle:
The brindle is the “tiger striped” coat pattern.   Brindle affects the red coat colors and tan points.  The brindle pattern shown in the Harlequin Pinscher the brindle gene has only be known to be dominant in nature meaning AT LEAST ONE parent must be brindle to get brindle offspring.

Merle/Brindle:
This is a dual pattern where the merle and brindle pattern is expressed on the same dog.  The Merle and Brindle genes are located on separate loci’s, therefore it is safe to breed these two patterns together.
Black and Tan Merle/Brindle Harlequin Pinscher 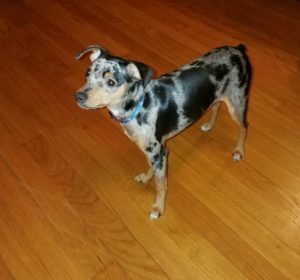 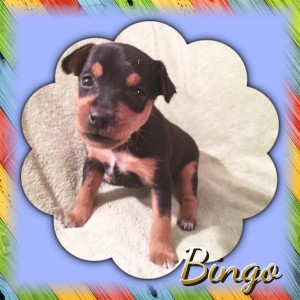 Tuxedo:
Also known as Irish Spotting – Where there is a white pattern on feet, chest and a partial to full collar.  A tuxedo patterned dog looks to be wearing a Tuxedo when stood on its hind legs.
Black and Tan Tuxedo Rat Terrier 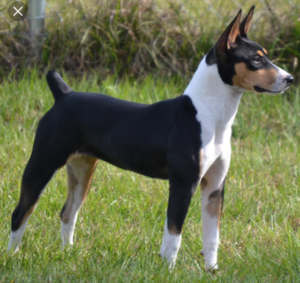 PIEBALD:
A white base coat with patches of unconnected colour.  A dog with a spotted coat.
Extreme white Piebald as seen in some breeds, such as the White Bull Terrier & Boxer,  may cause deafness due to lack of pigment in the inner ear.
Black and Tan Merle Piebald Harlequin Pinscher 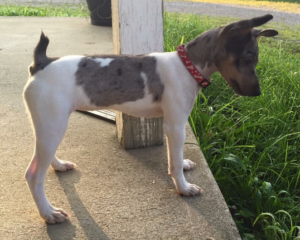